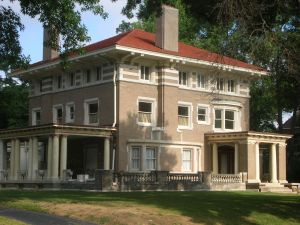 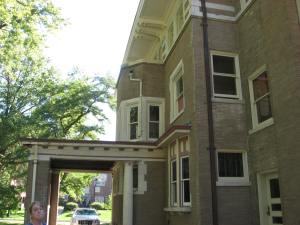 Eric and Jane Piper bought 20 Janssen Place in July 2011 and moved into the house in March of 2013 after the renovation of the attic and part of the second floor had been completed.  Here are a few questions I asked Eric:

Why did you choose 20 Janssen Place?

Jane and I have always loved Hyde Park and just as soon as our kids graduated from High School we began our search.  Wanting to find a house that was built pre-WWI was our goal.  (Our passion for collecting is really post-Victorian to pre-modern – which takes in Arts and Crafts, Prairie Style, Art nouveau both US and European. which spans roughly 1890 to 1920).  Hyde Park was one of three neighborhoods we had focused our search on (also Rockhill and Roanoke).  We (I, in particular) had always wanted to restore an historic house and I wanted to take on one that would be particularly meaningful to the neighborhood.  We found 20 Janssen Place on a Hyde Park homes tour one year, and knew that it was one in particular need of help.  After walking and driving through a lot of neighborhoods for months all over the City, we really just kept coming back to this neighborhood, street, and ultimately, the house.

How did you decide on the renovation process? 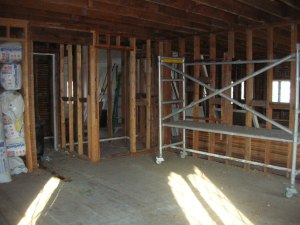 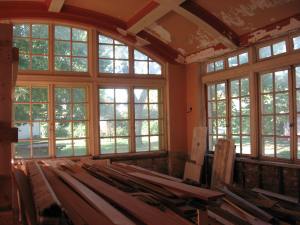 As a preservation architect by profession and history buff by hobby, the process really isn’t that daunting.  The previous owners had done most of the major demolition work getting the house back to its original configuration – it just needed to be finished.  Knowing in what order to do things and knowing the proper resources to get things accomplished at a professional level really is important.

All new electrical and plumbing, geo-thermal heating and cooling, what else is being done “internally” to complete the renovation?

The house was only about 50% intact on the inside since it had been chopped up into so many apartments.  So, you can’t quite call it a “total gut” because we’ve saved everything that was intact, but it sure felt that way at times.  The bathrooms, kitchen areas, and all of the interior walls on every level were all reconfigured back to their original shapes – so quite a lot was one “internally” in  additional to brand new systems.  We also had to do some additional structural reinforcement of the roof and certain walls.  The roof in and of itself was a very interesting story.

Are all of the windows original and have they been restored? 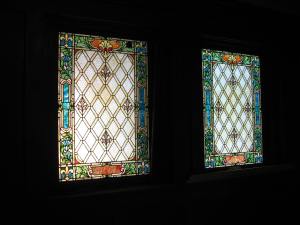 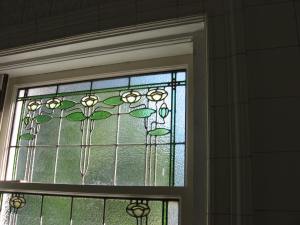 Yes.  All of the windows that had not been removed when converted to apartments have been restored rather than replaced.  Including all of the original hardware.

What was the process to restore the leaded glass windows in the attic? 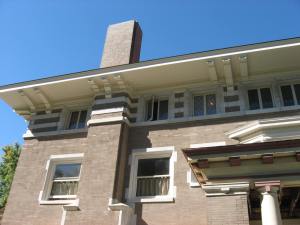 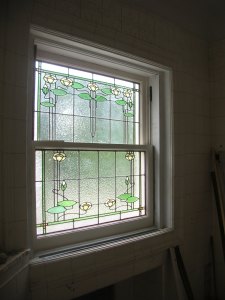 The third floor leaded (actually zinc) glass window sash were removed from their casings.  The panes were removed from their sash.  the sash was then dip stripped, repaired, patched and primed.  The leading was repaired, many panes were replaced (some had been repaired with Plexiglas) and all were re-glazed.  Because of all the lead paint, all of the windows and trim were completely stripped, sanded, patched, primed and re-painted, then re-installed with new copper weather stripping.

When I am selling large homes such as yours I caution my clients of the utility costs – you chose geothermal heating and cooling, what’s involved?

There are three components to the geothermal system.  The pipes that capture the more temperate air that’s underground, the heat exchanger and the fan blower unit that distributes via ductwork throughout the home.  We have nine 400′ deep wells drilled in our yard (two are for the Carriage House).  Two runs of plastic pipes run down into each well (one for supply, one for return) which all get connected and enter underground into the basement.  The pipes take the 50 degree water from the ground to each heat exchanger.  The fan unit works much like the fan in a conventional furnace / air conditioner – delivers cooler and warmer air to each space.  We have four units for the house.  The pipes outside replace the typical condensing unit (i.e. air conditioner) that most people have outside their home.

How significant are the energy cost?

The energy savings should be significant.  Our early estimates, when considering the federal energy tax credit, which is 30 percent, is for a 3-5 year payback.

What was the time frame for installation? 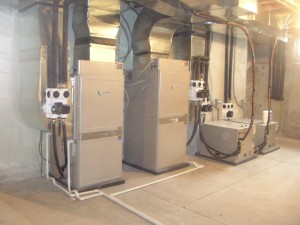 The actual drilling took just about a week, trenching another week.  I’d say pipes into the house was accomplished and the yard was re-graded in about four weeks, tops.  However, since we had to run all new ductwork (the house had no heating source when we started) the mechanical system took about four months, total.

The roof is tile, what kind of tile and is it original to the house? 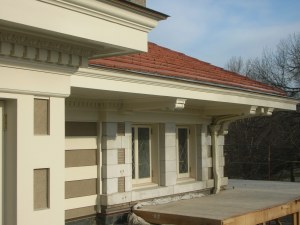 The roofing tile is original to the house and was restored by the previous owner.  It is made by the Italian Tile maker Ludowici who still make the same product.  Each tile is stamped with its fabrication date on the back – so you can tell they are original tiles.

Is this the kind of roof that was installed at the time?

Tell me about the soffits, they are beautiful – how were they reproduced? 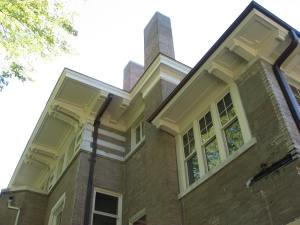 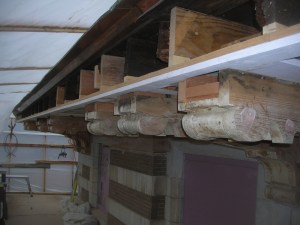 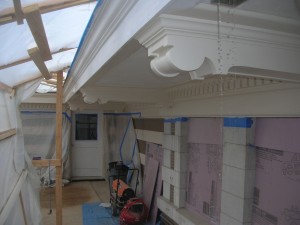 Thank-you.  We stripped the trim down to the bare wood to get rid of the lead based paint – doing so in EPA certified manner.  A special infrared heat gun was used that really sped up that process.  We had to replaced a lot of rotted wood caused by leaks in the copper lined box gutters.  The original cement stucco soffits were either scraped and repainted, replaced with cement board and re-stucco’ed, or simply patched.  The original egg and dart plaster molding was either stripped and repainted, or, in many areas, we had to replace it.  We had over 125 lineal feet of new plaster molding cast by a local craftsman (Phil Wassmer of Wassmer Studios) using an original piece to make the mold that was used around various areas of the soffits.  You can’t tell which is the new or the old they did such an incredible job.

The interior walls were all configured to their original shape, did you have any thoughts about enlarging the size of the kitchen? Maybe combining the butler’s pantry with it or your huge dining room? 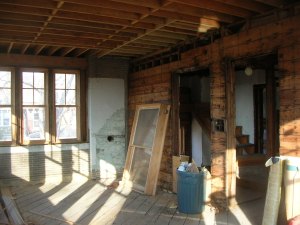 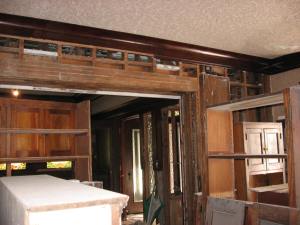 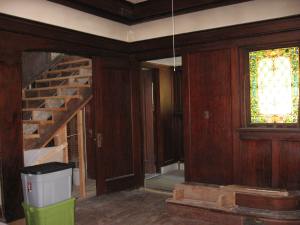 We had thought about that but wanted to try to be as true to the original as possible and decided from a it didn’t make any more functional sense for us to do so.  We like an open kitchen – that feels more like another room in the house.  Thus, the main kitchen does not have any upper cabinets so we can hang artwork on the walls, whereas the dry pantry is floor to ceiling cabinets on one wall.  We consider the main kitchen “cooking kitchen” (which still has an island for mingling around) and the butler’s pantry an extension of that for un-cooked food prep, bar service, microwave, etc.  We think it’s gong to work perfectly for the way we use our kitchen, and the flow through to the main hallway, and also the dining room will work great for entertaining.  Since it’s not a “dead-end” there won’t be a bottleneck in the kitchen.  Not all historic houses have kitchen’s that work as well for modern living – it’ll just be occupied by the owners instead of maids and butlers.

Are you able to match original doors and hardware to their original placement in the house? 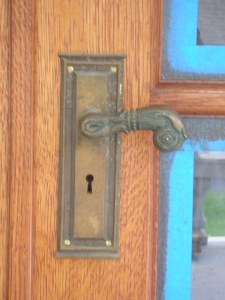 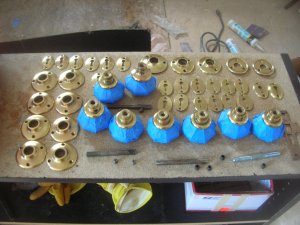 Yes.  Lots of stories here.  We had enough original doors that we were able to get custom ones made to match – down to new knives being cut to make the trim profiles exact.  There was enough of the original hardware intact in each floor that we could tell what style went where.  All of it had to be refinished since most of it had been painted over the years.  When we elected to go with crystal doorknobs throughout the second floor instead of using metal on the closets and bathrooms, we were fortunate enough to hind some on line that, not only matched, but had the same patent date stamped on them.  I’m kind of an EBay junkie, so finding old hardware to match the existing had been part of the fun.

Did you remove all of the plaster walls?  If so did you insulate all of the exterior and interior walls? 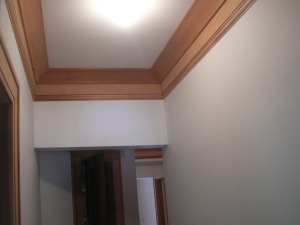 We have left what plaster walls were there in place where we could and patched them instead of replacing them.  However, on the third floor, all of the walls both on the exterior and the interior had been completed stripped to bare brick and studs, so we took that opportunity to use spray foam insulation on the outside walls and conventional batt insulation in the ceiling.  Since we had only had 2″ to work with, we used high density foam which gives a higher insulation value with less thickness.  The second floor exterior walls still had all the plaster and trim intact, so we punched holes top and bottom in each stud cavity and blew in loose fill insulation.  the firs floor, which has about 50% of the walls intact, will be a combination of these two techniques.

What are the plans for the Carriage House?  Will you renovate it to it’s original floor plan?  And what is the time frame?

The Carriage House will be restored back to its original configuration – which had a driver’s quarters upstairs – and we’ll take off the awful additions that were built over the vacated alleyway.  The previous owners had already started this.  We will wait until the main house is done, then focus on renovating the garage.  Since the Carriage House can qualify as a rental unit, it is eligible for Federal Historic Tax Credits in addition the State Historic Tax Credit, so it makes sense to have it be a separate project.  The only thing we won’t do is reinstall the turnstile inside the Carriage House which repositioned the cars 90 degrees inside the garage.

Once the house is completed what are your plans for the grounds?  Are you going to put in a patio area or swimming pool?

No Swimming pool.  We will use the original historic landscape as a point of departure, then plan the yard and gardens around that.  We can’t wait to get to landscaping, which will then be our passion as we grow old in this house.

When will the house be completed? 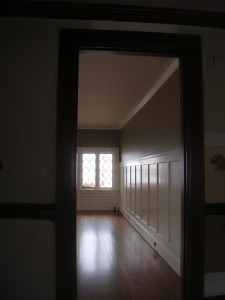 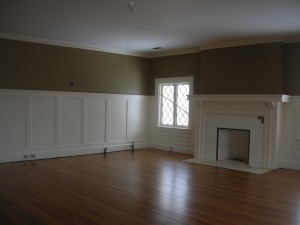 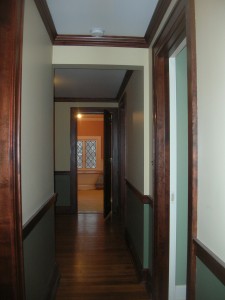 That’s a very good question.  We are hoping to be done with the house in the next 12 – 18 months.  maybe 6 months if we get lucky and all thing fall into place.  We are more focused on getting the details right than we are on a deadline.

I want to thank Eric Piper for his time and hospitality for helping me put this feature together.  There’s more to come and I can’t wait to follow up with Eric and Jane to see the finished product!